What Is a Designated Driver?

It is someone who agrees not to drink any alcoholic beverages and to transport home safely those who are impaired. It does not mean at the end of the night that the "most sober" or the "least drunk" be designated to drive. It is not meant to endorse any underage drinking and is not used for minors (we strictly endorse a zero tolerance policy for minors with alcohol). 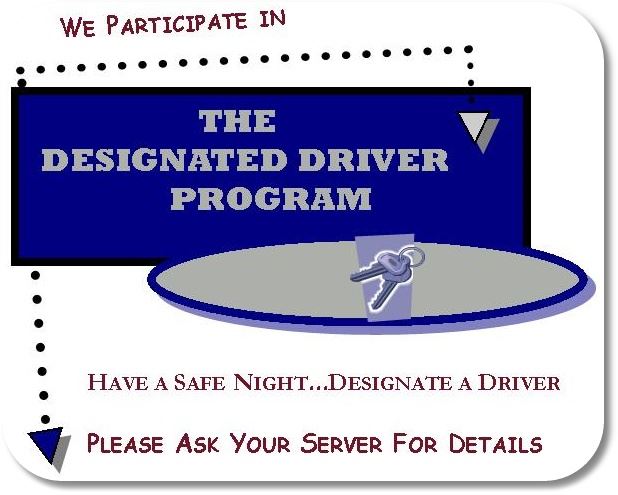 How Does the Program Work?

Participation is voluntary and controlled by the private businesses. The program itself is easy to implement. All that it needs is to plan ahead and designate one person who will only drink non-alcoholic beverages. Each business listed below has agreed to provide free non-alcoholic beverages to patrons who identify themselves as the designated driver to their server. Of course, they must be in a party of at least two people and not consume any alcoholic drinks. Each year, in November we ask each business to renew their commitment and participation in the program. It can be used at private parties as well. The host only needs to ensure that one person from each group/couple is selected as the designated driver. We also want to remind those hosts of alternatives of taxis, using a ride service, leaving cars overnight and spending the night for guests without drivers.

Why Did We Start the Program?

On Thanksgiving 2002 we responded to a head-on crash on Route 3A in Hingham. An intoxicated driver crossed the center lane and struck a family of six head-on. That family, including four children were, properly restrained in seat belts, car seats and an infant carrier. They were not seriously hurt. The intoxicated driver, with a blood alcohol content of .23% (almost 3 times the limit) was seriously injured. Without the seat belts and airbags the crash would have resulted in a holiday tragedy. This highlighted the increased danger drunk driver's cause especially during the holidays and we asked ourselves how we could be more proactive in preventing future drunk driving crashes.

This driver, however, was not coming from a Hingham establishment. This program is not meant to imply that any business has not already been serving in a responsible manner. It is only intended to help to ensure that intoxicated drivers leave and raise attention to the issue of drunk driving. In fact some business already offer some form of free non-alcoholic drinks.

Although when we first began the program in Hingham it was publicized as only running from the week before Thanksgiving through January 1, we found many businesses chose to continue throughout the year. As a result, in 2007 we expanded the program throughout the entire year, and it now runs year round. Each business is asked to renew their commitment each November. This time of year was chosen to renew the program because, especially before the start of the holiday season, we wanted to remind the public and the businesses of the issue of drunk driving.

As police officers we typically respond to crashes and investigate after the fact. We also try to detect impaired drivers through aggressive enforcement, saturation patrols, cell phone callers reporting possible impaired drivers, etc. These cannot work as effectively as being proactive and preventative. The best method is preventing drunk drivers from getting behind the wheel in the first place. In 2003 we had 52% of businesses participating. In 2004 it increased to 70%, in 2005 to 85%, in 2006 to 90%, in 2007 to 95%, Since 2008 we've had 100% participation.

Does it Cost Anything?

The only cost for the businesses is the price of non-alcoholic beverages. The promotional materials, such as the window stickers announcing that the business participates in the program, are distributed free. The original stickers, in 2003, were paid for by the Hingham Police Association. In 2006 we approached the Plymouth County District Attorney's Office and met with District Attorney Timothy Cruz to partner with their office. As a result the District Attorney's office agreed to support the program by re-designing and paying for new window decals and additional brochures. They used seized forfeiture funds from drug dealers in Plymouth County to pay for the costs. Part of the reason for partnering with the District Attorney's Office is our hope that other nearby communities would start up the similar designated driver programs therefore extending the program throughout the county.

In an effort to get as many businesses as possible to participate we do not accept donations from them for promotional materials. Again, the businesses already are doing donating enough by agreeing to participate in the program and give free non-alcoholic drinks away.

Regardless of what city or town you go to for dinner at your favorite restaurant, at a social function, wedding, etc. please do not hesitate to ask their server of the manager of they offer free non-alcoholic drinks to designated drivers, you may be surprised at how much they are willing to accommodate.

We stress participation by businesses does not imply that they are already not serving in proper and responsible manner. For more information about the program, contact Sgt. Steven Dearth.